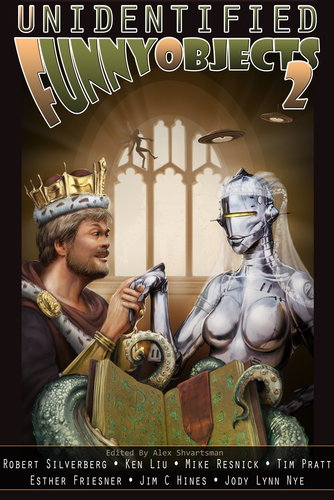 * A golem on an interstellar cruise ship

* Dragon-taunting for fun and profit

The MSG Golem by Ken Liu
Service Charge by Esther Friesner
Item Not as Described by J.W. Alden
Stranger vs. the Malevolent Malignancy by JIm C. Hines
How to Feed Your Pyrokinetic Toddler by Fran Wilde
A Stiff Bargain by Matt Mikalatos
The Girl with the Dagon Tattoo by Josh Vogt
Improved Cubicle Door by M.C.A. Hogarth
On Safari by Mike Resnick
How You Ruined Everything by Konstantine Paradias
Insider Information by Jody Lynn Nye
The Haunted Blender by K.G. Jewell
The Retgun by Tim Pratt
The Diplomat’s Holiday by Heather Lindsley
Congratulations on Your Apotheosis by Michelle Ann King
One Thing Leads to Your Mother by Desmond Warzel
Class Action Orc by James Beamon
The Wiggy Turpin Affair by Wade Albert White
Hannibal’s Elephants by Robert Silverberg
Save this product for later